Ask a Foot Doctor: What Causes Thick or Discolored Toenails? 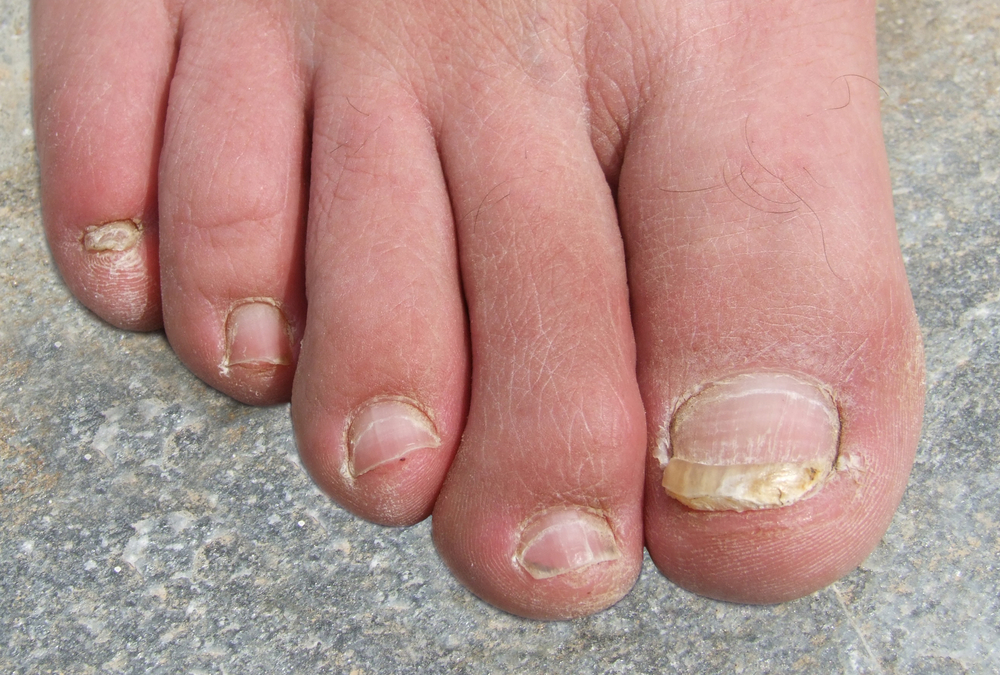 Thousands of people in Canada suffer from discoloured and thick nails. Usually, this is only an aesthetic issue, but it can cause pain if the nail starts to detach from the nail bed and parts of it fall off. If you’ve noticed a change to the appearance of your nails, book an appointment with your local foot doctor in Kelowna, BC or Victoria, BC. They can have a look at your nails and figure out whether you have nail fungus or whether it’s something else.

Ask a Kelowna, BC or Victoria, BC Foot Doctor: What Causes Thick or Discoloured Toenails?

The most common cause of thick and discoloured toenails is foot fungus, also called onychomycosis. At first, the symptoms might be very mild, but over time, people with toenail fungus develop very thick and sometimes even painful nails. Although this condition isn’t dangerous to your overall health, it’s best to get it treated since it’s unlikely to get better on its own.

Occasionally, your nails might become discoloured due to medication or an injury, such as a blow to the foot. If you’ve been injured, you’ll need to rest and potentially elevate your foot. People who use nail polish also suffer from discoloration, especially if they use red or orange colours. The best way to get rid of this issue is to take a break from painting your nails, but you could also try applying a clear layer first, which reduces the risk of staining.

What About Yellow Nail Syndrome?

Foot fungus is often the cause of discoloured and thick nails, but there is also a rare condition called yellow nail syndrome which can result in similar symptoms. As the name suggests, affected nails look yellow instead of clear, and they might grow more slowly, become curved or thick, have ridges, or even turn green or black. Sometimes, people who suffer from yellow nail syndrome don’t have a cuticle.

Scientists don’t yet know what causes this problem, but it is most common in people over 50 who suffer from certain other conditions such as arthritis, sinusitis, or lung disease. Although there is no treatment for yellow nail syndrome, it’s best to see your foot specialist if you notice any of the above-named symptoms. That way, you will get a diagnosis, and you’ll be sure no underlying health issues are causing your foot problems.

What Are the Symptoms of Foot Fungus?

So, how can you figure out whether you have foot fungus or whether your nails have simply changed colour due to trauma or bad nail polish? One of the telltale signs of fungus is that the nails will also become thicker over time, and they might start to break off more easily. In some cases, an unpleasant odour emanates from the nails and they start to look chalky.

Over time, foot fungus that isn’t addressed can cause your nails to detach from the underlying tissue, which makes it easier for dirt and debris to gather underneath. In severe cases, the nail can even fall off.

Who Is Most at Risk?

Experts estimate that 1-8% of the population suffers from onychomycosis, so this is an extremely common condition. For it to occur, the fungus or yeast has to enter your toenail where the bed meets the nail, through a crack in your nail, or through an injury that meets your nail bed. Then, it grows under the nail bed, where conditions are moist and warm. Over time, the infection can spread to other toes or even your fingernails.

Although everyone can contract toenail fungus, the people who are most at risk include those who often walk barefoot in public places, have an underlying condition like psoriasis or diabetes, already have athlete’s foot, or take medications that suppress their immune system.

How Can I Reduce My Chances of Getting Foot Fungus?

The best way to prevent foot fungus is to avoid walking barefoot in public places like communal showers, bathrooms, and swimming pools. Always bring sandals or flip-flops, and put them on before you enter the space. You can also reduce your risk by thoroughly drying your feet after every shower and ensuring they stay dry throughout the day, since fungus grows best in moist conditions.

Another way to improve your foot health is to live a healthy lifestyle. Studies have shown that smokers are more likely to have fungus than others, so it’s best to give up nicotine if possible. Finally, wear shoes that allow your feet to breathe properly and don’t constrict them. If you’re not sure what kind of footwear is appropriate, speak to your doctor, and they can recommend some brands or materials.

Do I Need to Get Treated?

You don’t always need to get foot fungus treated. If the condition isn’t bothering you or causing pain, you can practice good foot hygiene and use home remedies to clear up the infection. People who have had toenail fungus more than once or believe that it is getting worse need to contact a Kelowna, BC or Victoria, BC foot doctor who can help them access the medication they need or recommend appropriate measures, such as surgery.

If your feet are feeling painful because your nails are so thick, the first thing to do is to trim and thin the nails of the affected toes. This is also a good idea if you’re applying antifungal medication, since it can reach the deeper layers of your nail if it is no longer so thick. People who have never had nail fungus before might want to try over-the-counter creams, ointments, or sprays at the beginning.

Sometimes, these are effective at getting rid of the problem, especially if it is caught early. You might need to soak your feet in warm water before applying the medication, but it depends on the product. Read the instructions carefully. Unfortunately, fungal infections often come back, even after they clear up completely. The second time round, see a doctor.

Treatments at the Clinic

Your foot specialist will prescribe a stronger medication which can kill your toenail fungus more effectively. The first choice is often an oral drug that you must take for six to twelve weeks. Patients over the age of 65 or those who have liver problems might not be able to take this medication since it can cause side effects. A good alternative is antifungal nail polish, which is painted on the affected nail. You’ll need to use this for many months or even a year.

Nail cream is another option. It can work well if you thin your nails first and soak your feet before you apply it. If you have severe nail fungus that hasn’t responded to treatment, has been recurring for many years, or is causing you a lot of pain, your doctor might recommend surgery.

Most people whose nails are discoloured and thick have foot fungus, although a blow to the foot, medication, using certain kinds of nail polish, or yellow nail syndrome could also be the cause. Call us at Island Foot Clinics in Kelowna, BC and Victoria, BC to speak to a foot doctor and get a diagnosis. Nail fungus can be treated, but it’s best to address the issue as soon as possible since it can get worse over time.